We start with our usual round up from parkrun events on Saturday morning, and there was a healthy turnout from the Club, and we saw Members running at the Darlington South Park, Hamsterley Forest, Hackworth, Jubilee, Sedgefield, The Cinder Track (Whitby) and Town Moor (Newcastle) events.

Notable runs included Peter TENNICK’s run at Darlington South Park parkrun, where Peter broke the 20-minute barrier for a 5K for the first time, posting a new best of 19:51. Martin TURNBULL also bagged himself a Personal Best (PB) at the Sedgefield event, finishing in 22:09.

The big race on Sunday was the Brampton to Carlisle 10 Mile Road Race, which attracts a high-quality field, and promises fast times. A contingent from the Club travelled to the North-West to take on the race, and first home was John FIRBY, with a new PB of 58:26. Tracking him every step of the way, and finishing just three seconds adrift, was Dez FIELDEN. Dez crossed the line in 58:29, which was good enough for a PB, and to claim the Club Record for the distance in the VM45-49 Age Category.

Also grabbing himself a PB for the 10 Mile distance was Stuart JOYCE, who completed the race in 70:04. Trish KAY was the sole female runner from the Club, and Trish had a fantastic run, finishing in 1:21:49, and claimed third place in her Age Category (W60). Trish also set a new Club Record for the distance in the F60 Age Category.

Sunday afternoon saw the Croft Motor Racing Circuit play host to the latest fixture in the NYSD XC (Cross Country) calendar. The races took place in decent conditions, with the Ladies and Over 65 Men’s races first off. In the Ladies race, which took place over 6.2K, Carley GIBSON was first home for the Club in 37:25, followed by Melanie ROWLAND in 39:12, Kelly DICKINSON (41:01), Sandrine HEWITT (41:27) and Susan CLARK (52:38).

In the Senior and Veteran Men’s Race, which took place over 8.2K, Richard CAMPBELL was first home for the Club in 35:45. Gareth KYLE shadowed Richard for most of the race, just losing ground on the final lap, but finished with a decent time of 36:26. Peter TENNICK was the next Aycliffe runner across the line, finishing in 39:17, and he was followed by Matthew HERON (40:14), Martin SEDGWICK (42:54), Ryan PEARSON (44:10) and David STOTHARD (49:12). 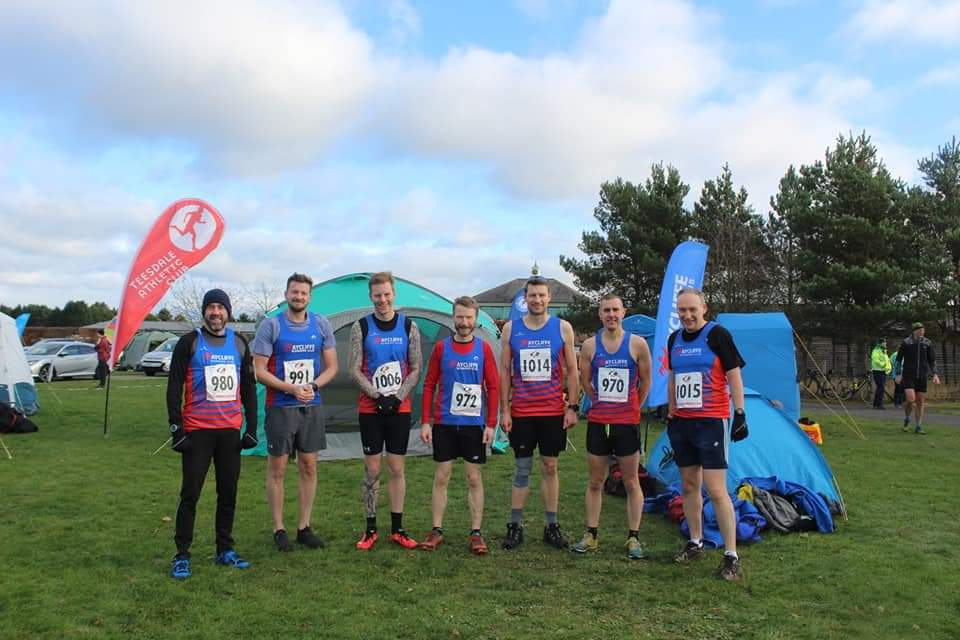