We start this week with a look back at the Port of Blyth 10K, which took place on Sunday, 3rd April 2022. Starting at Blyth Quayside, the race takes place on an out and back course, heading to Seaton Sluice, before returning on itself. John SURTEES was the first Member of the Club home, completing the race in 35:15. Richard CAMPBELL was the next Member to cross the line, finishing in 37:17, which provided Richard with a new Personal Best (PB) for the distance. Paul DALTON was the final Aycliffe runner to finish, completing his run in 39:21.

John FIRBY was our first runner home, crossing the line in 19:27, which also secured him Second Place overall on the night. Paul DALTON finished in 21:45, with Andy TALBOT completing his run in 23:47, and finishing second in the M60 Age Category.

On Saturday morning, 25 Members started their weekend with a parkrun, with representatives of the Club turning out at events across the North-East. At the Town Moor parkrun in Newcastle, David THOMPSON was completing his 25th parkrun, whilst just up the road at Rising Sun parkrun, Paul DALTON was completing his 200th parkrun. At Hamsterley Forest parkrun, Richard TONGE had an excellent run, registering a new PB of 32:29 for the event.

Later that morning, Sandrine HEWITT took part in the Hawkshead 16K Trail Challenge, hosted by Lakeland Trails. The event took in the delights of Beatrix Potter country and featured the mile long ‘Coffin Trail Hill’. Sandrine completed the tough route in a time of 2:20:21. 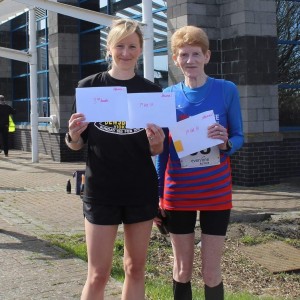 Sunday saw Members out in force once again for the next race in the Club Championship – the Hartlepool Marina 5 Mile Road Race. Starting adjacent to the Museum of the Royal Navy, the course is an out and back along the promenade to Seaton Carew before runners turn back on themselves. First home for the Club was John SURTEES in 27:30 (PB), with Dez FIELDEN close behind following a fantastic run (28:18), which represented a new PB for Dez. His performance also saw him claim second place in his Age Category on the day, and the Club’s M50 Age Category record for the distance.

Richard CAMPBELL continued his excellent form, completing the race in 29:09 (PB), with Paul DALTON (30:48) our next runner home. Stuart JOYCE also recorded a new PB, finishing in 31:30, and finished third in his Age Category (V55). Stuart was followed by our first female finisher on the day, Tracey SURTEES, who completed the race in 31:53, which was a new PB for Tracey, and good enough to claim Third Place overall in the Ladies race. Tracey also took First prize in her Age Category (F35).

Andy TALBOT was our next runner home in 32:42, which saw Andy claim third place in his Age Category (V60), and he was followed by Matt MUIR, who had a great run to finish in 34:18. Trevor NEEDHAM demonstrated that age is no barrier, finishing in 35:08, which was a new PB for Trevor for the distance, and in doing so claimed the Club’s M65 Age Category record, and finished second in his Age Category (V65) in the race.

Angela SUTHERAN also claimed a PB, completing the race in 37:29, and she was closely followed by Simon TURNER in 38:02. Trish KAY continues to run well, finishing the race in 40:27 and claimed the F60 prize on the day. Trish also established a new Club Record in the F60 Age Category.

It was great to see Peter SMITH out running for the Club once again, completing his race in 40:37, with David STOTHARD next home in 42:33. Jayne RUDD continued her recent good form, establishing a new PB for the distance (43:02). Rob NICHOLSON finished in 47:35, with training buddy Nicola INGMAN not too far behind in 49:32. Eve DOE set herself a new PB, finishing in 49:44, with Ian STOTHARD crossing the line in 53:48.

Elsewhere, John FIRBY returned to Wallsend to take part in the Terry O’Gara Memorial 5K Road Race. The race promises a flat course on the Cobalt Business Park, and usually attracts a fast field. John benefited from both, completing the race in 16:53, establishing a new PB for the distance.

Husband and wife team, Peter and Donna JARPS headed to Elvington Airfield near York for the Big Flat Runway Races on Sunday. With five different race distances on offer, Peter and Donna opted for the Half Marathon, with both crossing the line in a finishing time of 2:07:00.